Our Company is among few offering complex services of this sort. This applies in particular to farms and land highly neglected from agricultural point of view, where any cultivation is rather unproductive, and often entirely ungrounded as regards economy.

The above grounds should reach their full production capacity within ca. 2-3 years. Approximately 30 t of soilage/ha was obtained in the first year after establishment of crops (alfalfa, clover) from two, and in part of the area from three swaths. In the next years the plans include harvesting from 4-5 swaths, yield reaching 50 t/ha.

The above land reclamation works in neglected areas of this sort, as well as proper agrotechnical procedures are necessary and required if it is planned to have a modern and highly efficient farm established. As a company, we are interested in lease or long-term usufruct of large land areas (min. 20-30 ha of meadows, pastures) in our neighbourhood, that is within 30 km from Mirosławiec (West Pomeranian Voivodeship). Depending on terms and conditions of agreement, we can partially or wholly perform appropriate land reclamation works aimed to bring the areas to proper agricultural condition, free of charge, in return for long-term usufruct and harvesting. This may be a very attractive offer for those farmers, who do not have suitable agricultural equipment. 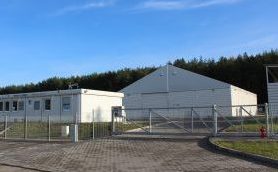 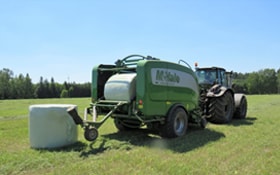 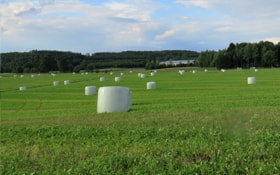